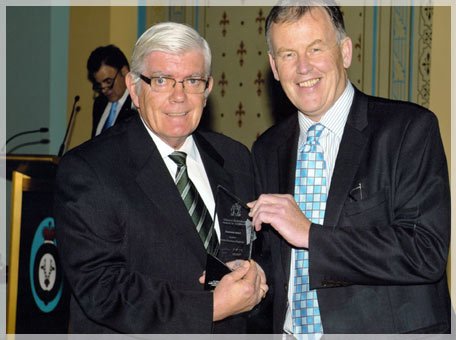 In September 2010 Tobin Brothers Funeral Directors were awarded with the Business Corporate Award for "recognising inclusive practices or initiatives by a business or corporation that utilises and promotes Victoria's multicultural advantage" at Victoria's Multicultural Awards for Excellence 2010 by the Victorian Multicultural Commission.

Tobin Brothers was recognised specifically for the introduction of specialist services, designed to meet the unique need of Melbourne's culturally diverse community.

Tobin Brothers were acknowledged for their sensitivity and cultural awareness in providing excellent service to their client families.

Employing staff from a range of cultural backgrounds with particular skills including bi-lingual and specific cultural and religious knowledge, services and tailored to the needs of the following communities:

Michael Tobin and Ha Nguyen from Tobin Brothers attended the Award Ceremony at Government House on Tuesday, 21 September 2010 where the Victorian Government recognised more than 180 individuals and organisations for outstanding service to Victoria multicultural and wider community.

Welcome to the Tobin Brothers Funerals website which we believe provides extensive, clear and practical information about our funeral services and options, as well as details of our after care support services and events. If you require information in respect to costs our Funeral Planners will provide an itemised fee proposal outlining all of the services and costs involved with a funeral, so as to reflect the life of your loved one and your family's needs.

Refresh
Please enter the numbers and letters you see in the image. Note that the case of the letters entered matters.*:
There are some invalid fields. Please wait...
Message has been successfully sent.